Many institutions are working on energy scenarios for the future. This includes those associated with governments, corporations, groupings of countries like the Organization for Economic Cooperation and Development (OECD), multilateral agencies like the World Bank and the Inter-American Development Bank (IADB), and agencies like the Inter-governmental Panel on Climate Change, linked to the UN Framework Convention on Climate Change. Social and labour organisations are also trying to build alternative scenarios.

Generally, institutional analyses tend to be restricted almost exclusively to one aspect of the transition: the change in the energy matrix; that is, the change in sources. Other aspects, like eliminating energy inequalities, ecosystem impacts, or the mechanisms and conditions need to ensure that the transition does not lead to bigger social, environmental, or labour conflicts, are not taken into account.

Some scenarios developed by relevant institutions are described here by way of example. 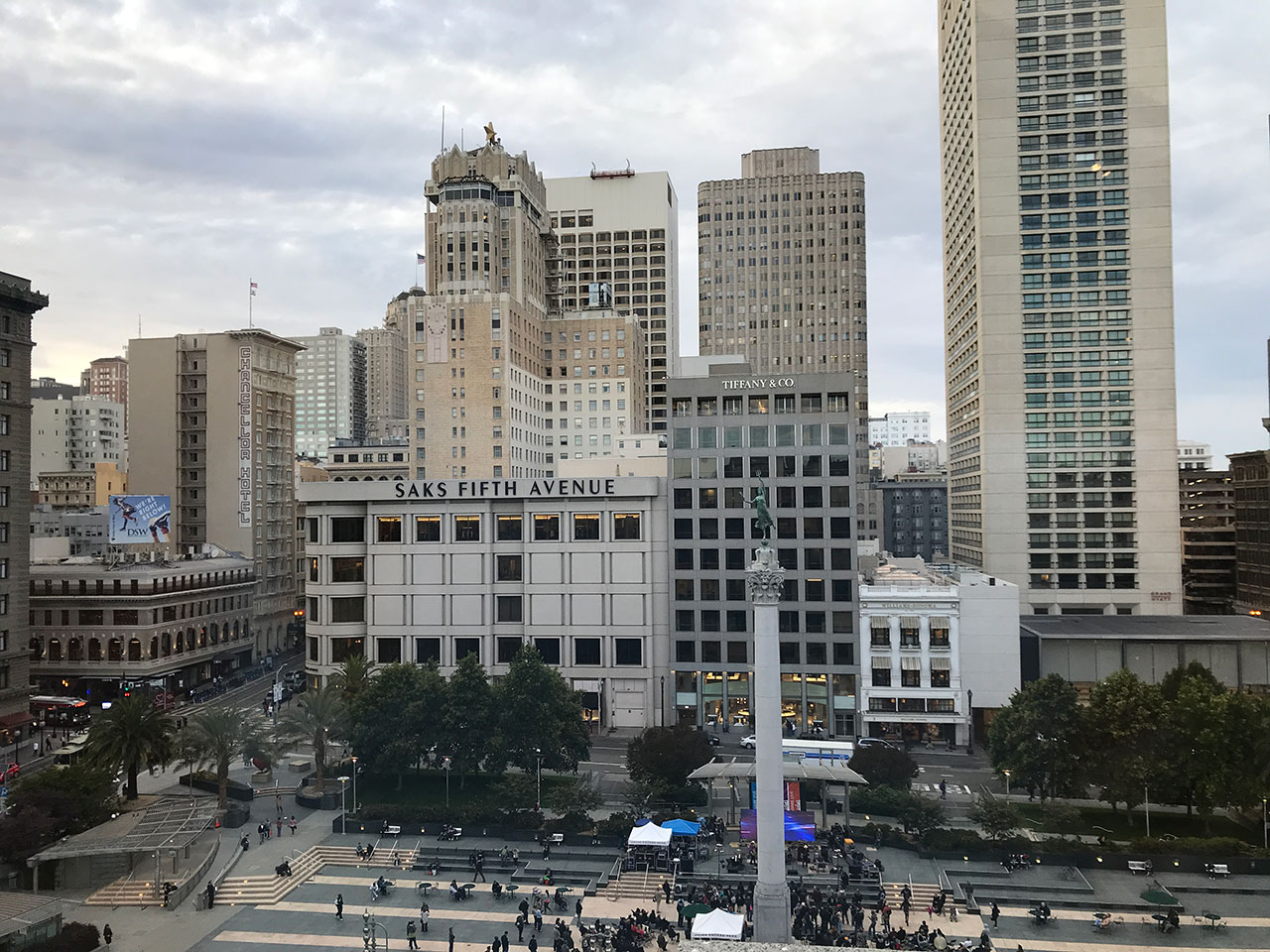 The International Energy Agency (IEA) was created by OECD countries in the 1970s to challenge power in the energy sector in response to the Organization of the Petroleum Exporting Countries (OPEC). Thus, the so-called developed countries created a space where they could defend their geopolitical interests in the field of energy. The scenarios designed by IEA have changed over time and show certain contradictions, for example, by positing the need to leave two-thirds of fossil reserves underground, while presenting policy scenarios that argue that demand for fossils will continue to rise.

Currently, IEA proposes two types of scenarios for the future: the New Policies Scenario (NPS) and the Sustainable Development Scenario (SDS). The latter is relatively new and is the first to visualise a plateau in energy use and the reduction of greenhouse gas emissions. However, the response times envisioned would not be adequate to ensure that a temperature increase of 1.5°C is not exceeded and, moreover, the scenario is assigned a near-zero probability of occurrence.

Along with other actors, IEA asserts that transforming the energy reality will require strong governmental action. However, it does not clarify what type of actions are required, or what the implications would be.

British Petroleum (BP) is one of the largest oil companies in the world. It regularly makes relevant information and long-term analyses available to the public.

The BP Energy Outlook 2017 asserts that global energy demand will grow by around 30 percent by 2035. It predicts that – although the energy matrix will change – oil, gas, and coal will continue to be the main sources of energy. Although it estimates that the growth rate of greenhouse gas emissions will be reduced, these emissions will continue to increase. This growth far exceeds IEA’s (conservative) scenario of 450 ppm, which is consistent with the objectives of the Paris Agreement. BP contemplates two scenarios of fast and very fast change, with low probabilities of advancement. 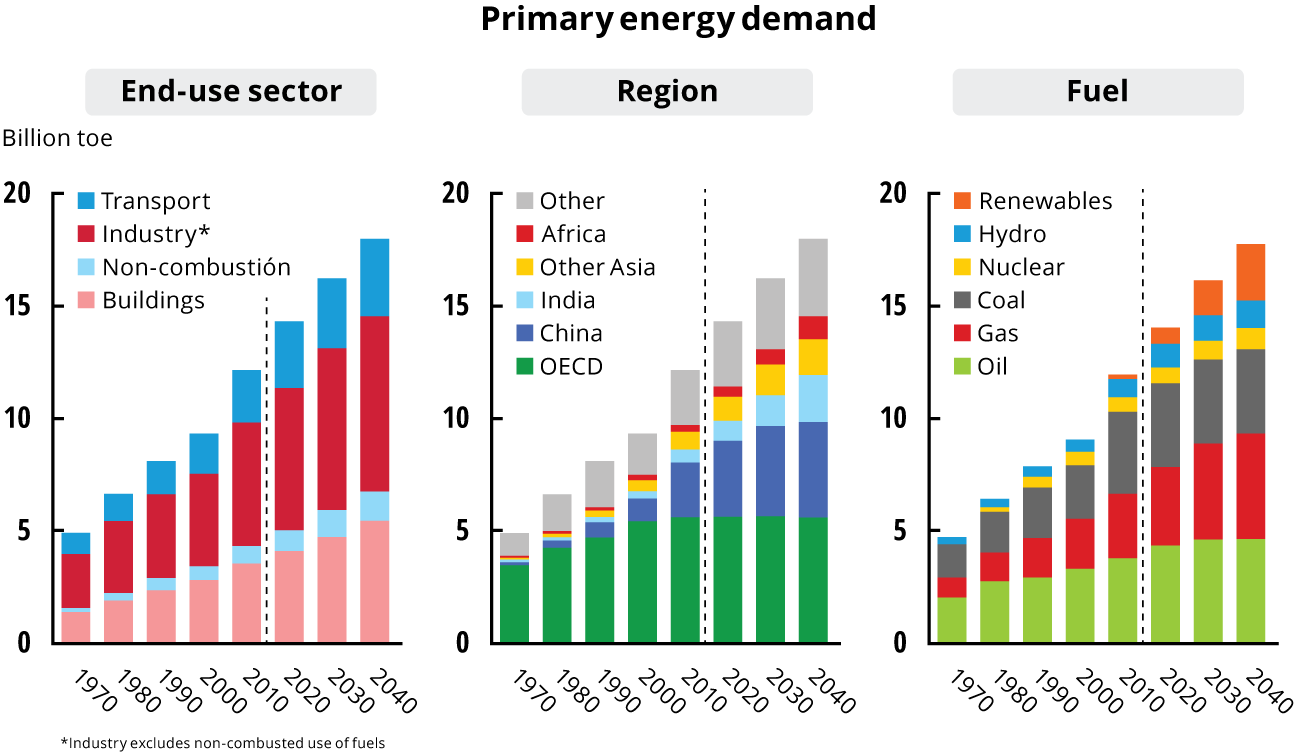 The International Renewable Energy Agency (IRENA) is one of the institutions that proposes scenarios with the greatest changes. As an alternative to the scenarios that project a continuation of present existing trends, and therefore expect a 40 percent increase in primary energy use by 2050, IRENA proposes a scenario called ‘REmap’, in which primary energy would be slightly lower than in 2015 and two-thirds of it would be generated with renewable energies (IRENA, 2018). 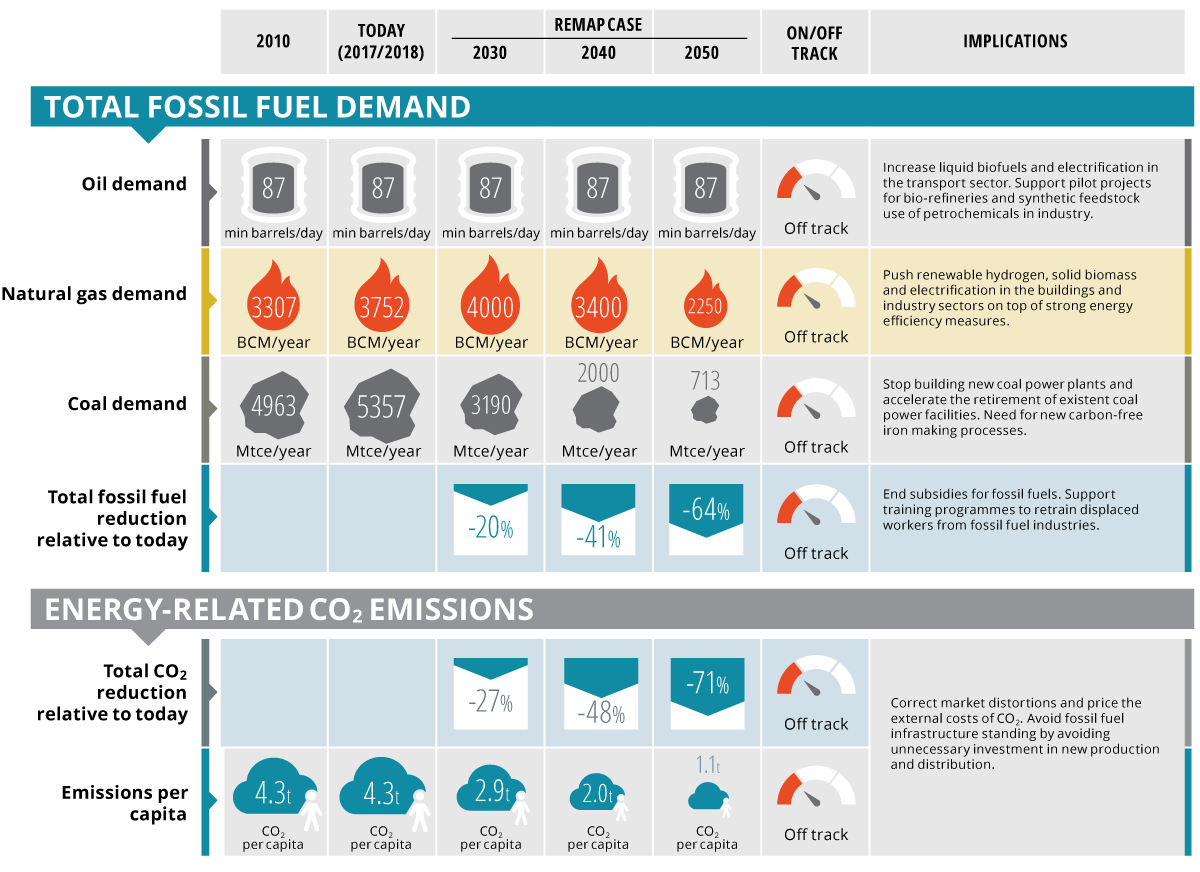 At the international level, there are a number of institutions that have developed possible scenarios, not only for increasing renewable energy use, but also for reducing net energy use. Here, we find the work of many universities, and in particular, the scenarios designed by the specialised consultancy Ecofys.

The scenarios are based on the ‘energy triad’ concept: 1) electrification and end use savings in the first phase; 2) increasing the use of renewable sources; and 3) covering the remaining uses with fossil fuels, which would be reduced to a minimum. In this way, they developed a scenario based on nearly 100 percent renewable energy.

Evolution of energy supply in the Earth Scenario, showing the key developments. 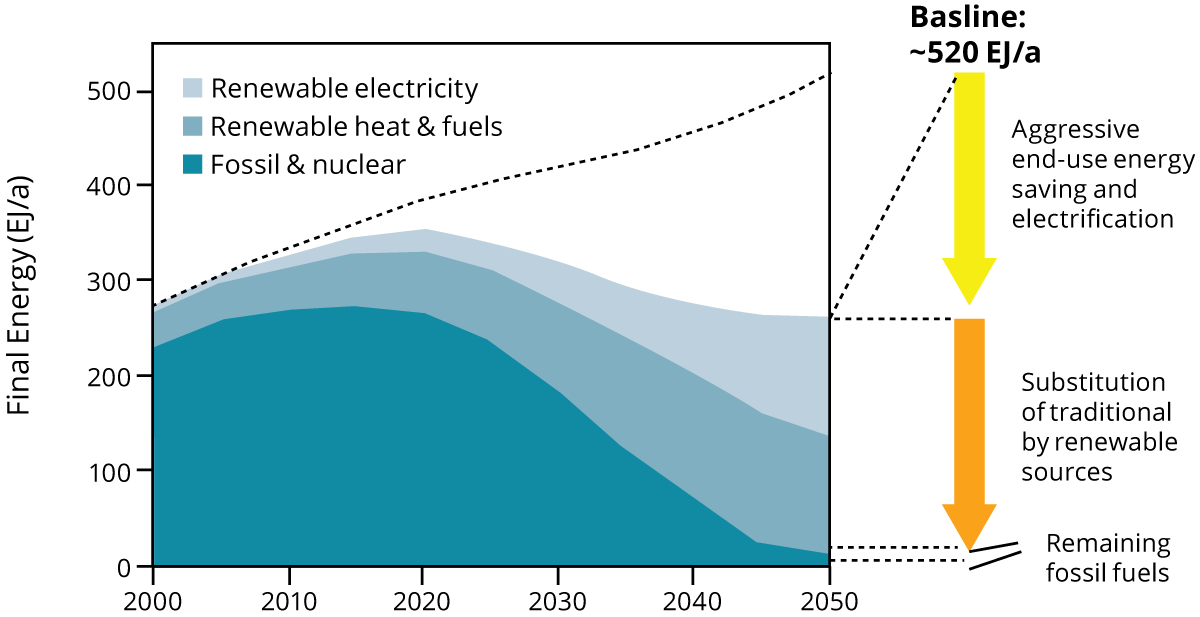 There is a permanent debate over future scenarios, since the variables, contexts, and possibilities considered are based on the interests of the different institutions. Some studies predict the possibility of both a reduction in energy consumption and an almost-total shift to renewable energy sources. However, these analyses focus on the technical possibilities related to energy availability and use, without considering social and environmental implications. Developing scenarios, especially those that are national and multidisciplinary, is a significant challenge for proponents of a peoples’ energy transition. 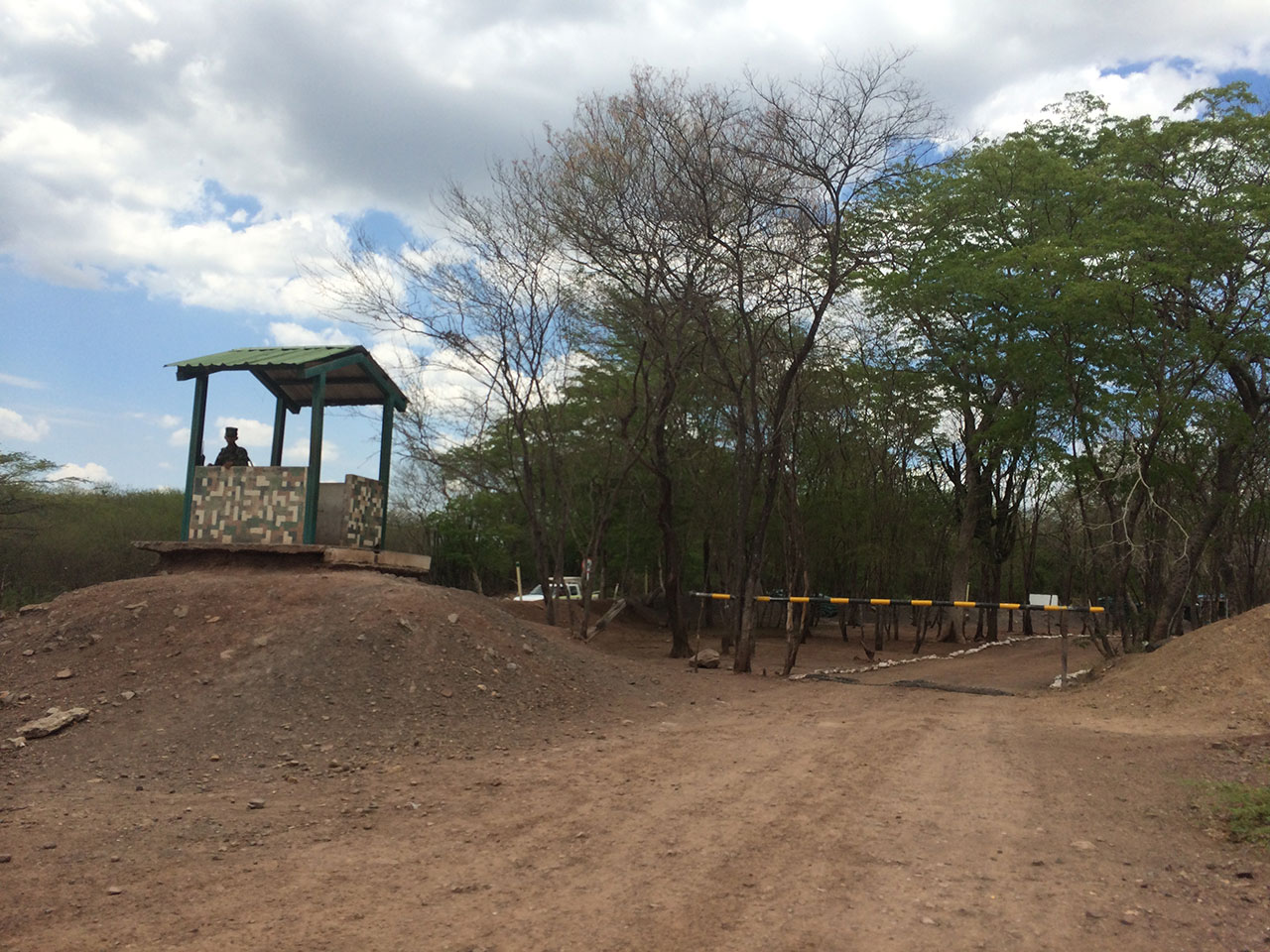